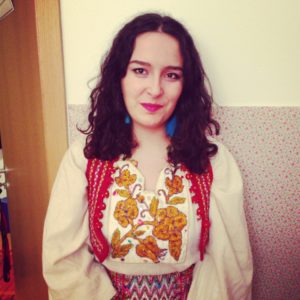 Loves writing in English, speaking in German, cooking in Albanian. Studied economics and management, while nurturing an ever-growing passion for marketing and new-media. Likes meeting people from all over the world and arranging objects in aesthetically pleasing ways. Actually located in Prishtina, Kosovo. Rrita started her own blog (shenime.com) to document her journey and invites you to follow her.

Prishtina, Kosovo Okay, I might be highly biased in making this choice, but then again, how could I not love my home city? Prishtina might not be particularly beautiful on the outside, but I find it absolutely stunning on the inside (both in how the cafes and shops are decorated and in terms of the city’s personality and attitude). From an urban-planning-point-of-view, it is really messy: even the street names change too often for people to remember them. Everyone uses landmarks and big buildings as orientation points. But it has this undeniable charm and freshness to it. It has the potential to become anything!What I love about Prishtina is not the fact that I have grown up there, but that the city has grown up almost in parallel with me. Sometimes I wish someone would’ve kept track of how the city changed throughout the years, because it would remind us of how fast things can make a turn for the better in life. Now that I’m living abroad, I notice how much it changes every six months: it makes it seem like the city is as alive as it can be! And that is why no matter what, it will always be one of my favorite places to go back to.http://www.airportpristina.com/en/

The walk of magical memoirs, Disneyland Paris I can’t really remember this particular place very well, but I do have this photograph of it to remind me of it every now and then. In Disneyland Paris, there is a street with bricks containing the names of people that visited the amusement part throughout the years. The street, or area (as I said, I can’t remember well), is called the Walk of Magical Memories.Over a decade ago, before my brother and I were even in our teens, our family went on a trip to Disneyland. On the edge of our departure, my parents placed an order for a brick to be laid on that Walk of Magical Memories that would have my brother and mine’s name, our date of visit and our home country. We of course left before they could finish the brick and I haven’t been to Disneyland since. I have never seen this brick in real life and all I have of it is a picture that a family friend took when he visited with his family. I love this place – or, should I say, the picture of it – particularly, because it reminds me of how selfless my parents had proven themselves to be. Instead of spending their short vacation time exploring Paris, they chose to spend the visit in an amusement park for children, ride with us on the rollercoasters and enjoy evening fireworks – all for our enjoyment. It reminds me of the kind of selfless person – or parent – I want to turn into.I hope that one day I can visit the Walk of Magical Memories again.http://www.disneylandparis.com/

Schnoor, Bremen Reminiscent of fairytale neighborhoods, the Schnoor Quarter was the first place I saw in Bremen, after moving here almost two years ago. Excited and scared as I was, I didn’t know what to expect from a city I hadn’t heard anything about. At the time of my departure, I had had no idea that once in Bremen, I would find a collection of narrow stone streets surrounded by colorful, tiny houses oozing with personality. How could I have known that by moving to unknown and unfamiliar Bremen, I was actually moving closer to a place so magical that it reminded me of the many fairytales my mother and grandmother used to tell me as a child? Every once in a while I like to go back to Schnoor to get lost in those narrow streets. The area is by no means big, but it holds more beauty than one could think possible. It reminds me day by day, that I shouldn’t be afraid of the unknown and unfamiliar – that in fact, the unknown and unfamiliar can bring you closer to places so beautiful, it feels like they were taken straight from your childhood’s imagination.http://www.bremen-tourism.de/enjoy-bremen