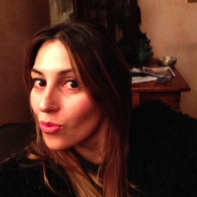 Melissa was born in Rimini where she lived for almost 30 years. She got her PhD in biomedical engineering. With her husband Melissa she worked at Jacobs University. As she wanted to be more close to Italy Melissa moved to Munich with her two kids and husband, where she now works for Ludwig Maximilian University Munich. She loves watching movies, travelling and practicing sport; she calls herself „Tv-series addicted.“

Rimini, Italy That’s where I grew up, that’s my city, that’s my beach. Luckily enough I had not to travel anything relevant to go to the sea, to visit historical places nor to find beautiful restaurants or discos. Rimini always had all of them. Although its golden age was during in the 80’s, it still has a great historical and cultural power. It’s the hometown of the world famous director Federico Fellini, it has a bridge from the Roman Age still used by cars (2000 years celebrated in 2014 and still working! They should have had really great engineers back in time…) and all in all a fascinating atmosphere. I love to walk along the beautiful streets of the ancient city center, from the Arch of Augustus toward the Tiberium Bridge, then in the small neighborhood of San Giuliano full of artists and nice restaurants, and obviously up to the very long and large, golden beach. And finally after a long day there’s always a club or a disco ready to keep me up all night long.

Honolulu, Hawaii Honolulu is a magic place that I will always bring on my hearth. It has been my first destination during the honeymoon, something that since that day I had only the possibility to spot on some movie or fancy magazine. It’s a mixture of all you can desire in a single place: a gorgeous beach, a wild nature, an amazing weather (well, it rains a lot but it’s always warm) and beautiful and huge hotels and facilities. More than this, it’s exactly as depicted: people out of offices go directly to surf, a mixture of joy and loneliness, resulting in the characteristic sad mood of the Hawaiians, is all around in the air. And it’s enough to walk some step out of the city to fall in a completely different and wild environment. Here it’s where they shot Lost, the world famous tv series. In Honolulu, as in all the Hawaii, you can really feel yourself very far from all the main continents.

New York, USA I’ve been many times in this fabulous city or, better to say, in this city made of many cities. It’s enough just to think a while how many songs New York has deserved along its comparably short history: only few hundreds of years of life but still so many things to tell. New York, and in particular its hearth, Manhattan, definitely deserves to be walked: in a few hours from Central Park you can reach Ground Zero, going through many different worlds. From the classy upper-east side to the always bright-Time Square; the luxurious 5th Avenue and the magnificent Gran Central Station. The Empire State Building, the Rockefeller Center, then Union Square, Tribeca, Chelsea and far many corners and streets, all of which would deserve a mention. I can only recommend the tour of the Sex & City places, almost entirely shot in Manhattan, with particular attention to the authentic restaurant mentioned in this tv-comedy cult: from the Tao to the Sushi Samba, just to make the first two name out of my head. Impossible not to spend a night at the Madison Square Garden for a Knicks game. Well, the list is still full of suggestion, but what really matters in New York is the atmosphere…
+